WhatsApp has already become an integral part of life for many. Since 2009, WhatsApp Messenger has offered users an initially text-based message exchange. Over time, other features were added to make communication between multiple interlocutors more extensive and appealing. Instead of the expensive SMS, it has been possible to communicate with friends and family via the smartphone for free since 2009. An Internet connection is required as a prerequisite for this. Provided an Internet connection is available, the user can send messages, photos, videos and more from anywhere in the world. He can make appointments, share the latest experiences, check on the state of the interlocutor and more.

The goal and purpose of the Messenger service is thus to enable free communication in text and images. This saves the user the high cost of SMS or even picture messages MMS and, moreover, makes him more flexible. He can send messages of all kinds to his contacts at any time and from anywhere. And he also has many chats at a glance. He can also see the chat history and create backups. So called backups of the message history. If there should be problems with the iPhone, he can still access the history via the back-up. These many aspects are now appreciated by many millions of users. For this reason alone, WhatsApp is a practical way to write with many contacts via this service.

WhatsApp offers many features that allow for varied communication. First of all, there are the classic text messages. Users can decorate these text-based messages with emojis and emoticons to express how they feel, how they feel, and more. The emojis and emoticons thus intervene exactly where letters get nowhere. In addition to that, users can send links, insert GIFs, send photos and more.

Messages can be sent to more than just individual people, however. If a photo, text, video or more is to be sent to several people at once, a group chat can be created in advance.

It should not always be a text? So how about a voice message? A good alternative to making a direct phone call and writing a text. But telephoning via WhatsApp is also possible via IP telephony. There are no costs in this case.

In addition to the aforementioned photos and videos, numerous expression options for emotions and sensitivities, files can also be sent. Whether Word documents, PDFs, Excel spreadsheets and more. With WhatsApp, one is almost unrestricted in sending message formats.

If you don't always want to see messages from certain people and groups immediately, you can mute certain chats. What this means. New messages are not shown as push messages on the smartphone display. Instead, they are only displayed when WhatsApp is opened. You can also limit the sharing of your own status with contacts to certain people. Not all people should always be able to see the shared status.

Fast, simple, many functions. WhatsApp is very easy to use for everyone. These are partly the reasons why the WhatsApp Messenger is so successful worldwide. But the free use, the many functions and the easy handling have their price. Because when it comes to the question of data privacy and security, WhatsApp had to step up. The awareness of its users for data protection and their security and privacy has been strengthened by the new DSGVO from the end of May 2018.

Until now, WhatsApp was repeatedly criticized for its data protection regulations. Received and sent data were sent unencrypted. But that should change with the latest app version. Because this now has end-to-end encryption. This should make receiving and sending messages more secure. However, it remains to be seen to what extent the new version can actually keep up with the new data protection regulations in this respect. Ultimately, it is still the risk of the user of the WhatsApp messenger. 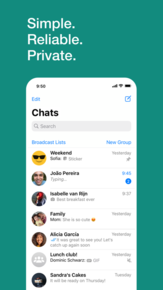 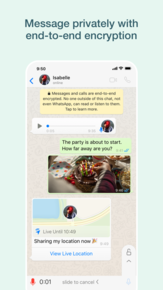 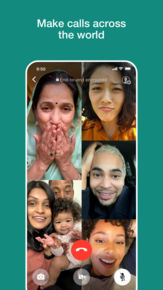 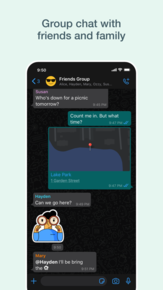 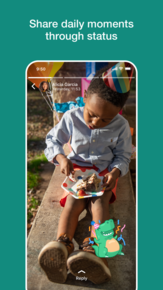 Microsoft OneNote
Productivity
4.6
Write a comment on WhatsApp Messenger
Disclaimer:
1. app-anleitung.com is a tutorial, review and blog news website for apps for mobile and desktop devices and not a place for getting them.
2.app-anleitung.com is not an official representative or the developer of this application (app).
3. If you are the owner or developer of an app presented here and would like your app to be removed, please contact us here.
4. Every content on this website (if not mentioned other) is our sole intelectual property, written by our own in-house authors or other authors working on our behalf. Other copyrighted materials belong to their respective owners and are marked accordingly.
5. Every single page of our website is conform to Google Advertising Policies, such as the Unwanted Software and Malicious Software Policies and moreover the Microsoft Advertising Policies.
6. Official links, where they might appear, will always lead to an official and secure source for the respective application.