This is what Call of Duty Mobile is all about.

Call of Duty Mobile is an adaptation of a well-known computer game franchise for mobile devices. The storyline is based on the content of both Call of Duty: Black Ops and Call of Duty: Modern Warfare. Specifically, this means that you as the player take on the role of a secret agent who fights against the agents of the other side and tries to eliminate them. The exact time in which the setting takes place is not clearly shown. This is also relatively unimportant, since there is no story mode in Call of Duty Mobile.

The game only offers the possibility to compete against other players in multiplayer battles. You can choose between the classic Call of Duty multiplayer mode or a battle royal mode. However, this doesn't mean that the game isn't fun or only a little fun. Quite the contrary. Fans of the series will love the mobile adaptation. Rarely has a game felt more like the original, as is the case with Call of Duty Mobile. The maps and settings used are already familiar from the other games in the series. This makes it easier, especially for experienced players, to find their way around the mobile version.

By participating in the multiplayer battles, you'll gain experience, advance in your player level, and thus be able to get all sorts of rewards. Most notable here are the weapon skins and camouflages. While skins improve the stats of your weapon, camouflages are solely of an optical nature.

The gameplay of Call of Duty Mobile

Making a shooter successfully available for mobile devices is no easy feat. However, Call of Duty mobile has succeeded very well. The touchscreen controls are simple and intuitive. If you still have problems with the assignment of the touch zones, you can easily adjust them.

As usual in Call of Duty, sniper rifles are among the most popular weapons among players. That means you shouldn't run too much into the open, especially at the beginning of a battle. Because even though aiming on mobile devices is a bit of a challenge, there are enough points why you have to be careful. On the one hand, there is the semi-automatic control, which wastes a lot of ammunition, but also causes more frequent hits - even if it is only due to pure luck. On the other hand, there is also the possibility to play Call of Duty mobile on the PC with mouse and keyboard. This is very easy via an Android emulator - and is even advertised by the developers. This point has to be evaluated ambivalently. While this makes the game accessible to a wider audience, it also destroys the balance in combat. After all, it's much easier to fight with the mouse than with the touchscreen.

If you don't fancy the classic multiplayer mode, you can also try your luck in the Battle Royal. Here everyone fights against everyone else. You don't take your equipment directly with you, but have to collect it on the map first. And only the last survivor wins.

Evaluation of Call of Duty Mobile in detail

Visually, Call of Duty mobile is a real highlight. The controls are also very well done and have been optimized for mobile devices. The maps, the feeling during the match, the weapons used - all this gives the feeling of playing a full-fledged Call of Duty. And that is indeed what the mobile version is, even though there is "only" multiplayer and Battle Royal.

The level system is fair, and the rewards you get after the games are good. However, for special events, you have to collect them manually - so don't forget about that! All this animates to play again and again. The comment function also makes it easy to find fellow players. And if this doesn't work out, the game can be filled up with computer-controlled opponents. If you love Call of Duty, you won't want to miss the mobile version for a quick game in between. 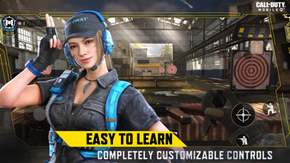 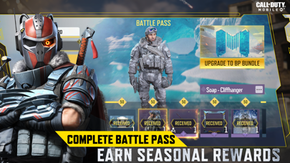 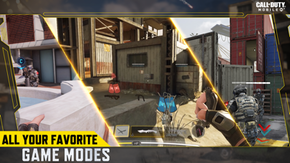 Call of Duty: Mobile
Games
4.7
Write a comment on Call of Duty: Mobile
Disclaimer:
1. app-anleitung.com is a tutorial, review and blog news website for apps for mobile and desktop devices and not a place for getting them.
2.app-anleitung.com is not an official representative or the developer of this application (app).
3. If you are the owner or developer of an app presented here and would like your app to be removed, please contact us here.
4. Every content on this website (if not mentioned other) is our sole intelectual property, written by our own in-house authors or other authors working on our behalf. Other copyrighted materials belong to their respective owners and are marked accordingly.
5. Every single page of our website is conform to Google Advertising Policies, such as the Unwanted Software and Malicious Software Policies and moreover the Microsoft Advertising Policies.
6. Official links, where they might appear, will always lead to an official and secure source for the respective application.